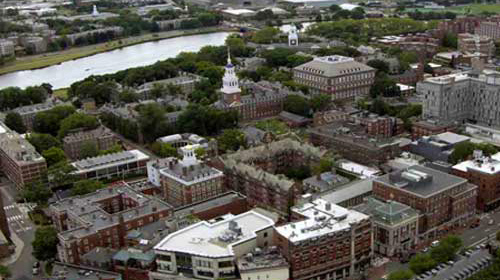 Harvard University is devoted to excellence in teaching, learning, and research, and to developing leaders in many disciplines who make a difference globally.

With world-class faculty, a dedication to affordability, and groundbreaking research opportunities, committed scholars have all the resources they need to fulfill their academic and personal potential.

With a 375-year tradition of educating leaders in every endeavor, Harvard College is proud to deliver an education focused on both knowing and doing, on individual achievement and on meaningful collaboration in a supportive environment that fosters intellectual risk-taking.

The mission of Harvard College is to educate the citizens and citizen-leaders for our society. We do this through our commitment to the transformative power of a liberal arts and sciences education.

Beginning in the classroom with exposure to new ideas, new ways of understanding, and new ways of knowing, students embark on a journey of intellectual transformation. Through a diverse living environment, where students live with people who are studying different topics, who come from different walks of life and have evolving identities, intellectual transformation is deepened and conditions for social transformation are created. From this we hope that students will begin to fashion their lives by gaining a sense of what they want to do with their gifts and talents, assessing their values and interests, and learning how they can best serve the world.

Harvard is steeped in traditions. Everyone knows about the annual Harvard vs. Yale football game, which draws thousands of students, and alumni to enjoy a weekend full of hype and school spirit. Harvard Yale, a better known Harvard tradition, happens right before Thanksgiving break every school year. It’s the last football game of the season and the location always alternates between Cambridge and New Haven. Regardless of each team’s respective record coming in, this football game always draws a huge crowd of students, faculty, and alumni.

Primal Scream is a tradition at Harvard University. At midnight on the last night of reading period and before final exams begin, students streak through the Old Yard. The streakers begin in the north end of The Yard and generally make one lap around, but the more adventurous sometimes aim for more. This is done both semesters, even during New England winters. Some of the streakers will “dress up” in capes and masks, or top hat and tails, or other costumes, but their genitalia are still exposed. The walkways through which students run are lined with spectators and the Harvard University Band plays beforehand to excite the crowd. Before it became a “night when the whole student body comes together to gawk at just that” it was a night with a closer association to its name. Beginning in the 1960s students would congregate in the Yard or open their windows and just yell for 10 minutes. It was designed as a way to release stress. By the 1990s, the streaking aspect of the evening had become prominent. It is still designed to give stressed out students a chance to “step outside the box.”

The John Harvard statue is probably the most touched object in the University. Its left foot is subjected to almost incessant rubbing by tourists who believe that the act brings good luck; the standard pose, for photos, is to place a hand on John Harvard’s shoe, which has become shiny from the human contact. But Harvard students themselves know better than to touch it—not least because one of three traditional deeds that some College students strive to complete before graduation involves urinating on John Harvard.

A Community Designed Around You. From the moment our Freshmen walk into Harvard Yard until they graduate they are surrounded by people dedicated to making Harvard “home.” Our students make friends in their classes, in the dining halls, on the intramural fields and through student activities.

Students come from all 50 states and from over 80 countries; from cities, suburbs, small towns and farms; from public, private and parochial schools; from every ethnic and religious background; and from across the economic spectrum.

With over 400 official student organizations including extracurricular, co-curricular and athletic opportunities in addition to academics, Harvard students are active around and beyond campus. Whether in Harvard Stadium playing on the field or cheering on The Harvard Crimson, volunteering through organizations like PBHA, fostering entrepreneurial activities in the Harvard innovation lab, writing or editing at The Harvard Crimson or The Harvard Lampoon, or researching in one of the many labs, Harvard students are continuously learning — and constantly busy!

Brown is an independent, coeducational Ivy League institution comprising undergraduate and graduate programs, plus the Alpert Medical School, School of Public Health, School of Engineering, and the School of Professional Studies. The College offers 80 concentration programs that lead to the bachelor of arts or the bachelor of science degree.

The University, which is based in Cambridge and Boston, Massachusetts, has an enrollment of over 20,000 degree candidates, including undergraduate, graduate, and professional students, plus some 30,000 other students who take credit courses, non-credit courses, and seminars. When people refer to Harvard students, often they mean the subset of roughly 6,400 students who attend Harvard College.

Harvard is the oldest institution of higher education in the United States, established in 1636 by vote of the Great and General Court of the Massachusetts Bay Colony.

John Harvard’s statue stands in Harvard Yard and is the third most photographed statue in the U.S. Despite its popularity, Harvard students call it the “Statue of Three Lies” because the inscription reads “John Harvard, Founder, 1638”. John Harvard was in fact not the founder but rather a benefactor who was honored in the naming of the university. Harvard was also not founded in 1638 but in 1636 and is the oldest college in the U.S. Finally, the statue is not actually a depiction of John Harvard but of a random student sculptor Daniel Chester French used as a model.

When Harvard was first founded, calculus class was not offered because it had not yet been invented. Calculus emerged in the late 1600s with the publication of “Nova Methodus” by Gottsfield Leibniz. In fact, Galileo, who died in 1642, was still alive during Harvard’s early years.

(May 29, 1917-November 22, 1963) John Fitzgerald “Jack” Kennedy, often referred to as JFK, served as the 35th President of the United States until his assassination. A former Lieutenant in the United States Navy (1941-1945), he was also a United States Senator from Massachusetts (January 3, 1953-December 22, 1960), and a member of the U.S. House of Representatives from Massachusetts’s 11th district (January 3, 1947-January 3, 1953). The reign of his presidency took place during the Bay of Pigs Invasion, Cuban Missile Crisis, building of the Berlin Wall, Space Race, African American Civil Rights Movement, and early stages of the Vietnam War. The Kennedy family, having produced a president, three senators, and multiple other representatives on the federal and state level, is one of the most established political families in America.

(born October 28, 1955) William Henry “Bill” Gates III, an American business magnate and philanthropist, was the Co-founder (1975), Chairman (1975-2000), President (1977-1982), and CEO (1992-1998) of Microsoft Corporation, one of the most recognized brands in the computer industry. His investments include Cascade Investment LLC (private investment and holding company), bgC3 (think-tank company), and Corbis (digital image licensing and rights services company). Gates is the author of two books: The Road Ahead (1995), and Business @ the Speed of Thought (1999). He is consistently ranked among the world’s wealthiest people.