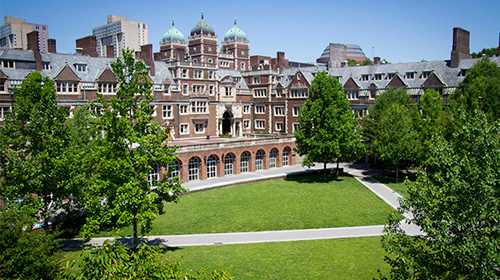 Penn has a proud tradition of translating knowledge into social-minded action that dates back to our founder, Benjamin Franklin. This tradition of active pragmatism, articulated in Franklin’s maxim “well-done is better than well-said,” lives today through the inclusive policies, innovative work, and impactful engagement of our faculty, students, and staff.

Penn offers many avenues to find what you like and what you’re good at, and meet peers whose interests align with and diverge from your own. This wide diversity of social, political, religious, and cultural activities on campus deeply enriches the life of the University.

Philadelphia is a historic and vibrant city that has much to offer Penn students, faculty, and staff. Penn’s dynamic West Philly locale, in particular, gives the University meaningful opportunities to positively impact and be positively impacted by the local community.

Take a stroll down Locust Walk, sit and chat with Ben on the Bench, cheer on the Quakers, and become a part of Penn’s many unique and historic traditions.

The University of Pennsylvania’s roots are in Philadelphia, the birthplace of American democracy. But Penn’s reach spans the globe.

Faithful to the vision of the University’s founder, Benjamin Franklin, Penn’s faculty generate knowledge that is unconstrained by traditional disciplinary boundaries and spans the continuum from fundamental to applied. Through this new knowledge, the University enhances its teaching of both theory and practice, as well as the linkages between them.

Penn excels in instruction and research in the arts and sciences and in a wide range of professional disciplines. Penn produces future leaders through excellent programs at the undergraduate, graduate, and professional levels.

Penn inspires, demands, and thrives on excellence, and will measure itself against the best in every field or endeavor in which it participates.

Penn is a major urban university that is committed to strength and vitality in each of its communities. In this connection, Penn will:

Encourage, sustain, and reward its faculty; nurture, inspire, and challenge its students; and support and value its staff; Strengthen and appreciate the diversity of its communities; Support free expression, reasoned discourse, and diversity in ideas; Pursue positive connections to the city, state, and region and a mission of service to its neighbors in West Philadelphia; Develop and support its connections to alumni and friends; and Foster the growth of humane values.

Toast throwing: As a sign of school pride, crowds of Quaker fans perform a unique ritual. After the third quarter of football games, spirited onlookers unite in the singing of “Drink a Highball,” which refers to the University’s unofficial cocktail, the Pennsylvanian, made with Calvados, a dash of Madeira Wine, an egg white, and a twist of lemon. In years long past, students would literally make a toast with the drink to the success of Penn’s athletic teams. During Prohibition, stubborn students insisted on keeping their tradition – since they could not use alcohol, they had no choice but to literally “toast” Penn. As the last line, “Here’s a toast to dear old Penn,” is sung, the fans send toast hurling through the air onto the sidelines. In another version of the origins of toast throwing, in 1977, a student threw the first slice of toast after being inspired while attending a showing of The Rocky Horror Picture Show where members of the audience throw toast at the screen. In more recent years, some students have become more creative in their choice of projectiles, and it is not rare to see a hail of bagels or donuts, or even a loaf of French bread come flying down from the stands. The athletics department has purchased several industrial street sweepers built by Tenant Inc. The latest is a 6400 Rider Sweeper used for cleaning the concourses and track area of the stadium. The sweeper is often called the “toast Zamboni”.

Econ Scream: At midnight on the eve of the first Microeconomics 001 midterm exam, hundreds of students (predominantly freshmen) try to release stress by participating in a collective shout on the Junior Balcony of the Lower Quadrangle. Streakers often run around on the grassy area of the lower quad. Many reliable sources attribute it to one particular fraternity who has upheld the tradition for many years.

Hey Day: In April, several class traditions are celebrated. Class Day, which began in 1865 to supplement the final graduation exercises, celebrates the progression of all classes and the departure of the seniors. In 1916, this day merged with Straw Hat Day and became the “day of two events.” In 1931, Hey Day arose from these two celebrations. On this day, the juniors gather on High Rise Field for a picnic, don straw “skimmers” and canes, and march triumphantly down Locust Walk to College Hall. The procession tradition began in 1949. More recently, the straw skimmers have changed to styrofoam hats, and classmates take bites out of one another’s hats. When the procession reaches College Hall, the students make an arch with their canes to greet the President of the University. The outgoing and incoming senior class presidents then give speeches, and the juniors are “officially” declared seniors. In May 2015, the university commemorated the celebration of the 100th Hey Day.

Ivy Day: One plants ivy by a building, and an “Ivy Stone” is placed on the building to commemorate the occasion. In 1981, the day was officially moved to the Saturday before Commencement. Also on this day, the prestigious Spoon, Bowl, Cane, and Spade awards, honoring four graduating men and the Hottel, Harnwell, Goddard, and Brownlee awards, honoring four graduating women, are presented. During the celebration, a noted individual who is chosen by the class gives an address.

Recent Ivy Day addresses have been presented by Penn Parent Joan Rivers, former Philadelphia Mayor and Governor of Pennsylvania (and also a Penn alumnus) Ed Rendell, and basketball player Julius Erving. The building receiving the Ivy Stone is very often a building of some significance to the graduating class. For example, in 1983, a stone was placed near the field in Franklin Field celebrating Penn’s first Ivy League championship in football since 1959 the previous fall—at the yard line from which the game-winning field goal against Harvard was kicked, clinching at least a share of the championship.

Spring Fling is an annual festival for the students at the end of each Spring semester, usually beginning on the Friday of the second to last week of the semester and continuing until Saturday night. Fling, which began in 1973, is dubbed the largest college party on the East Coast, and is hosted by the university’s Social Planning and Events Committee. The event takes place on College Green, Wynn Commons, and The Quadrangle (or Quad) for a student body drenched in alcohol, for the most part. Over the past few years there has been legitimate discussion towards potentially moving the event out of the Quad, but improved behavior has resulted in the carnival aspect of the festival remaining in the Quad. College Green becomes a staging area for carnival games and carnival food. Two stages in the Quad host Penn’s performing arts groups. Saturday night, Penn holds a festival on College Green, and Friday night SPEC (The Social Planning and Events Committee) brings in a headlining musical act for a concert.

Feb Club (originally a Yale tradition) is a tradition in which the members of the senior class attend a party or other special event every day for the entire month of February. Those with a perfect record of attendance have their name inscribed onto a Plaque in Smokey Joes Bar.

Walnut Walk: Taking advantage of Penn’s location in the city of Philadelphia, members of the senior class don Walnut Walk themed shirts and embark on a day-long, city-wide pub crawl, starting at 2nd Street near the waterfront and moving westward along Walnut Street until participants arrive at Smokey Joe’s on 40th Street, just south of Walnut. The event is one of the highlights of “Senior Week,” in which seniors celebrate the end of their time at Penn.

Rowbottoms: “Hey—Rowbottom!” or “Yea Rowbottom!” was a common cry on the West Philadelphia campus from about 1910 until the 1970s. Once a “Rowbottom” got underway, automobiles might be overturned, windows smashed, and trolley tracks doused with gasoline and set ablaze. In the 1940s “panty raids” of the women’s dormitories became a prominent feature. Rowbottoms were most frequent in the fall, particularly after football games.

From the one-of-a-kind museums on campus to accomplished student performances in music, dance, and theater, culture and the arts play a leading role in life at Penn.

A proud member of the Ivy League, Penn offers many unique and exciting opportunities for students, faculty, and staff to cheer on the mighty Quakers, participate in competitive team sports, and stay physically fit at state-of-the-art, world-class training centers.

With a multitude of housing and dining options both on and off-campus, all members of the University community can find the accommodations that make Penn feel like home.

Participate in social, political, artistic, and multicultural activities that put learning into practice.

University of Pennsylvania’s colors are red and blue; their sports teams are nicknamed the Quakers, and a Quaker mascot performs at football games.

Penn’s undergraduate students pursue more than 90 majors across four schools and engage in interdisciplinary programs that make the resources of all 12 Penn schools available as they forge new paths in research and scholarship.

The University of Pennsylvania has over 10,400 undergraduates, 11,000 graduate/professional student, and over 2,500 standing faculty members.

The first general-purpose electronic computer (ENIAC) was born in 1946 at the Moore School of Electrical Engineering at UPenn.

The Penn Relays hosted every year is the largest and oldest track and field event in the United States – it started in 1895. It attracts hundreds of participants annually.

Donald Trump, Tory Burch, Noam Chomsky, and the current president of Harvard are all Penn alumni.

(born in South Africa on June 28, 1971) became a multimillionaire in his late 20s when he sold his start-up company, Zip2, to a division of Compaq Computers. He achieved more success by founding X.com in 1999, SpaceX in 2002 and Tesla Motors in 2003. Musk made headlines in May 2012 when SpaceX launched a rocket that would send the first commercial vehicle to the International Space Station.

(born on December 28, 1978) became an in-demand session musician and songwriter, working with such artists as Alicia Keys, Twista and Janet Jackson. He was soon introduced to up-and-coming hip-hop artist Kanye West, and the two musicians collaborated on one another’s demos. Legend’s debut album, 2004’s Get Lifted, won three Grammy Awards. After two more solo albums, he released his collaboration with the Roots, Wake Up!, in 2010. Legend also appeared on the TV competition Duets as a coach before dropping his next album, 2013’s Love in the Future.