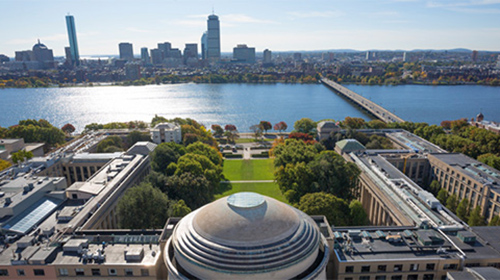 At its founding in 1861, MIT was an educational innovation, a community of hands-on problem solvers in love with fundamental science and eager to make the world a better place. Today, that spirit still guides how we educate students on campus and how we shape new digital learning technologies to make MIT teaching accessible to millions of learners around the world.

MIT is more than just academics. Students embrace their student experience, get involved in organizations, develop their leadership skills, join a committee, help student government, try out some hands-on or interactive hobbies or participate in paid or volunteer opportunities on campus.

For students, the campus has 18 residence halls, each with its own distinctive personality and community. The campus also offers on-site bicycle benefits for students and staff, including fix-it stations, secure bicycle cages, and a bike-share program. As a whole, the campus is urban and walkable, with more than 20 gardens and green space areas and more than 100 public works of art. At its edges, the campus merges with various Cambridge neighborhoods, including Kendall Square—where the close association of industry and research expertise has made this area the most innovative square mile on the planet.

The mission of MIT is to advance knowledge and educate students in science, technology, and other areas of scholarship that will best serve the nation and the world in the 21st century.

The Institute is committed to generating, disseminating, and preserving knowledge, and to working with others to bring this knowledge to bear on the world’s great challenges. MIT is dedicated to providing its students with an education that combines rigorous academic study and the excitement of discovery with the support and intellectual stimulation of a diverse campus community. We seek to develop in each member of the MIT community the ability and passion to work wisely, creatively, and effectively for the betterment of humankind.

Hacking: MIT culture distinguishes itself not only for its seriousness of purpose, but also for its unique sense of humor, as expressed through “hacking.” Hacks at the Institute are elaborate but benign practical jokes, perpetrated anonymously on campus, around Cambridge, or even farther afield, and that amaze for their creativity, cleverness, and difficulty of execution. A 1958 prank in which the Harvard Bridge was measured in increments of fraternity pledge Oliver Smoot has achieved such fame that “smoot” has been incorporated into the American Heritage Dictionary and is included as a unit of measure in Google Earth. The bridge still displays its quirky unit of measure today. Although not officially sanctioned, hacks can be appreciated for their technical prowess and humorous digs at rival institutions, for example in the astonishing emergence of a large black weather balloon with MIT written all it over in the middle of a Harvard-Yale football game in 1982, or in the 2006 cross-country theft of Caltech’s Fleming Cannon. Other famous hacks involve rather large objects falling from building rooftops (the Baker House Piano Drop) or appearing where they don’t belong, most notably on MIT’s Great Dome, which over the years has been graced by a Hilltop Steakhouse plastic cow, a Campus Police cruiser, the Wright Flyer, an MIT fire truck, and the Apollo Lunar Module.

Pirate Certificate: Not content to just produce exceptional graduates in the usual fields of study, the Institute also offers its swashbuckling students the opportunity to become certified pirates. How is this possible? Students who complete four physical education courses—archery, fencing, pistol (or rifle), and sailing—are eligible to receive a Pirate Certificate, officially awarded by the Department of Athletics, Physical Education, and Recreation. In addition to receiving a tangible document printed on faux parchment, newly minted pirates are rumored to swear a secret oath. Although they are no longer lily-livered landlubbers, their pirating activities nevertheless are limited to “entertainment purposes only.”

Brass Rat: In a ritual long enjoyed by MIT undergraduates, a committee of sophomores gathers each year to redesign their class ring, which is ceremoniously revealed during the spring term. The history of MIT’s class ring dates back to 1929 when a student committee convened to design what is formally known as the “Standard Technology Ring.” Featuring a beaver on top (an industrious, nocturnal, American animal), the Boston and Cambridge skylines on the sides, and the MIT seal and dome on the shank, the ring also incorporates unique design elements related to each individual graduating class. Made of gold, the ring’s nickname, “the Brass Rat,” derives from its color—similar to brass—and the prominence of the beaver mascot—resembling a rat. A concrete symbol of an MIT education, the distinctive Brass Rat is recognized worldwide and instantly identifies MIT alumni to one another, serving as a reminder of the bond that all MIT students share.

With 33 varsity sports, MIT supports one of the broadest intercollegiate athletic programs in the world. There are 16 varsity sports for men, 15 for women, and two coeducational programs. Approximately 20 percent of undergraduates join a team during their time at MIT. The intramural program offers competition in 18 sports with 4,000 students, faculty, alumni, spouses, and partners participating. MIT features one of the nation’s most expansive club programs, with more than 800 participants and 33 teams.

Most undergraduates live on campus in one of MIT’s 11 Institute houses or 36 MIT-affiliated fraternities, sororities, and living groups. All unmarried first-year students must live in one of the Institute’s residence halls—except those who commute from home.

Nearly 80 percent of incoming freshmen have prior training in the arts. More than 50 percent of all MIT undergraduates enroll in arts courses each year—with nearly half of students participating in music and theater classes and performance groups. Students can participate in more than 60 music, theater, visual arts, writing, and dance groups.

Tim the Beaver was chosen as the mascot of Technology because of its remarkable engineering and mechanical skill and its habits of industry. The proposal that the beaver be adapted as the mascot of the Institute was made at the annual dinner of the Technology Club of New York on January 17, 1914. The late President Richard Maclaurin formally accepted the proposal, and at this dinner a group of beavers shown in natural surroundings was presented to the Institute.

Spanning five schools — architecture and planning; engineering; humanities, arts, and social sciences; management; and science — and more than 30 departments and programs, an education at MIT covers more than just science and technology.

The Infinite Corridor lines up with the plane of the ecliptic twice a year, filling the 0.16 mile hallway with sunlight.

(born January 20, 1930) became a fighter pilot and flew in the Korean War. In 1963, he was selected by NASA for the next Gemini mission. In 1969, Aldrin, along with Neil Armstrong, made history when they walked on the moon as part of the Apollo 11 mission. Aldrin later worked to develop space-faring technology and became an author, writing several sci-fi novels, children’s books, and memoirs including  Return to Earth (1973),  Magnificent Desolation (2009) and No Dream Is Too High: Life Lessons From a Man Who Walked on the Moon (2016).

(born in China on April 26, 1917) began studying architecture in the United States in 1935 and eventually earned his B.A. from MIT and his M.A. from Harvard. After starting his own architectural firm in 1955, Pei went on to design such well-known structures as the Kennedy library, the glass pyramid at the Louvre and the Rock and Roll Hall of Fame. Now in his nineties, Pei continues to design innovative structures throughout the world and has countless honors for his work within the field of architecture.