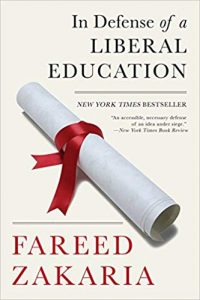 Have you followed CNN host and author Fareed Zakaria’s current publicity tour for his new book, In Defense of a Liberal Education? With all of the focus on STEM degrees and career preparedness, I was excited to hear a political pundit espouse the virtues of a liberal arts education – and dedicate an entire book to it.  I have long believed in the benefits of a liberal education (and came to the US to pursue one myself), so it’s no wonder I devoured his book in a single sitting.

Fueled by the perception that the U.S. is “losing ground” economically to other countries whose students are outpacing ours on standardized math and science tests, there has been a strong push toward math/science disciplines and technical training over the past decade. Startling to me, increasing number of states refuse to spend tax dollars subsidizing liberal arts programs at their state universities. However, Zakaria argues that the current generation of college applicants will be much better served by learning to write, how to articulate thoughts into speech, and most importantly, how to learn.

I think a lot about these same issues in my role as an independent education consultant, and it’s one of the main reasons I include personality and learning style assessments in my college application program The Complete Candidate™. I cannot emphasize enough the importance of choosing a college and course of study that is the right “fit” for each individual.  Too often, I see college-bound hopefuls who have bought into the current trend of math and science related degrees such as Engineering, Computer Science or Biotechnology. When I question them about the “science” behind their seemingly strong convictions, they explain that they want a good job after college.  While I have nothing against the pursuit of a technical career, many of my students (and their tuition-paying parents) might benefit from reading Fareed’s book – or from listening to Drew Faust, the president of Harvard university, who claims that a college education should prepare a student not for the first job out of college, but for the 7th or 8th job.

In my experience, the most successful graduates are those who learn the foundational skills that are critical to any career and to life in general. Intangibles that lead to a well-rounded and successful life include intellectual curiosity, communication, critical thinking, analysis and decision-making.  Whether it’s how to make a presentation to your Board of Directors, how to describe your design to investors or, even, how to select your spouse, it’s the skills taught through a liberal arts curriculum that help you succeed in life. Fareed argues, and I agree, that the advance of technology and globalization make a liberal arts education more valuable than ever before. The ever-increasing pace of technology, combined with continuously changing markets, suggest that many of today’s college students are preparing for jobs and careers that do not yet exist.  It is projected that the generation of students applying for college now will have between 5 and 7 careers over the course of their lifetimes. Even for students who do pursue a technical degree as an undergraduate, most of the skills required will be learned on the job. Each company will have different systems, protocols and processes. The most insightful employers are looking for employees who know how to learn.   And, at is most basic core, how to learn is what a liberal arts education teaches.

When a motivated student utilizes The Complete Candidate™ and follows the steps intrinsic to a solid college application process – identifying colleges that fit your learning style, defining an admissions strategy, creating your value as a candidate, writing insightful essays, soliciting meaningful recommendations, practicing interview skills – he/she will be rewarded with an enriching college experience and, hopefully, a lifetime of career and personal success.